The Athlete Games 2015:
This year is off to an amazing start with three of our athletes representing Crossfit Colchester at the Athlete Games. Held this year in the Phones 4 You Arena in Manchester, this competition featured some of the most formidable CrossFit talent this side of the Atlantic, including our own Darren Hotten, Melanie Saiz and Andrew Kearton.

Held over 2 days, 300 athletes were put through their paces with WODs that included a time 12 minute time capped CrossFit Total (1RM Back Squat, Strict Press and Deadlift), a beastly combination of thrusters and muscle ups and one WOD with a handstand followed by GTOH, rowing and pull ups. Melanie did us all proud with an amazing 295.4 kg on her Total and Andrew did a whopping 422.5kg, while Darren placed 22nd among the Rx’d men with a huge Total of 507.6kg. 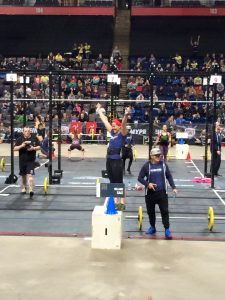 Those who were able to make the trip up to support our athletes had a great time cheering on Andrew, Melanie and Darren and we’ve all been inspired by the standard of ability seen at TAG. I would go so far as to credit their amazing performances and the atmosphere of the competition generally for a renewed dedication in us a group. The classes are full and everyone is pushing themselves. Other qualifiers that are underway or looming on the horizon, like Battle of the Boxes and Pound for Pound, are being tackled with real fire. Enthusiasm seems thick in the air at the box. Get inspired everyone! 2015 has just begun.