Highlights from the 2014 CrossFit Games:

As the popularity of CrossFit continues to grow, competition for a place at the CrossFit Games becomes stiffer.  Tough news for all of us as we look forward to the Open kicking off again in a few months.  But the amazing standard of athlete made for exciting watching at this year’s Games.

In July this year, the top 43 male and female athletes from 17 regions worldwide converged on the beach for the first of 13 WODs that would determine who would take home the title of ‘World’s Fittest’.   The beach WOD provided an epic visual start for the Games as athletes sprinted off towards the breaking waves, fighting their way through 3 swimming segments, burpees on the sand and kettlebell thrusters.  It was an opener that gave a little hint that the competition ahead was going to demand everything these athletes had to give.  To give an idea of how gruelling the Beach was, the first place male athlete in the WOD, Jordan Toyan, finished in 29 minutes, while the female’s first place was taken by Anna Tunnicliffe in 31 minutes.  Day one finished off with 3 attempts at a 1RM Overhead Squat. 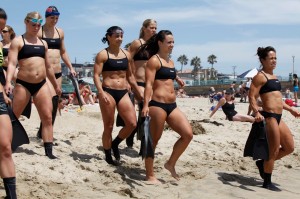 Day two saw athletes on an epic endurance WOD called: Triple 3, this consisted of 3000m row, 300 double unders and a 3 mile run.  2 sled push challenges and a nasty little 21-15-9 complex of deadlifts, cleans and snatches mixed up with pull ups, chest to bar pull ups and bar muscle ups finished off the day.  Rich Froning and Camile Leblanc-Bazinet, who both eventually took first place in the Games overall, both placed 1st in the 21-15-9 complex.

Day three kicked off with a Muscle Up Biathalon – 400m sprints and muscle ups in decreasing reps of 18, 15 and 12 – with an extra kicker.  Every time an athlete broke a set of muscle ups, they were required to run another 200m.  Some of the most exciting watching of the Games was the Clean Speed Ladder on day three.  Athletes were given 2, 3 & 4 minutes in 3 sections to work their way through increasing weights of Squat Clean’s.  Speed and strength got Elisabeth Ainkwale and Neal Maddox 1st place spots in this WOD.

The final day saw a test for the midline in a combo that included GHD sit ups, handstand walking and overhead walking lunges, as well as another 1st place score for Rich Froning.  In fact, Froning took 1st place in all three WODs of the final day securing himself the title of ‘Fittest Man on Earth’ for the 4th year running.  Camile Leblanc-Bazinet finished the day on the podium, too, crowned ‘Fittest Woman on Earth’. 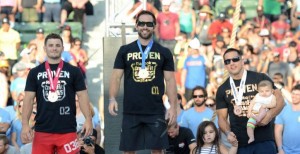 Our homegrown heroine and ‘Fittest Woman’ in 2013, Sam Briggs, didn’t make it past Regionals this year but we know she will be back to fight for her title in 2015.  While Annie Thorisdottir, winner in previous years and 2nd place winner in 2014, said that competition at the Games is getting more intense.  There are more hard working athletes every year nipping at the heels of these greats.  With this track record, the 2015 Games is bound to be the best yet so make sure your ready!!!