Registration is now open for Battle of the Boxes 2015 and the battle is on for the title of ‘Europe’s Fittest CrossFit Box’.  Boxes all over the continent are gearing up for the January qualifiers and preparing to fight for a place at the finals in May 2015.

Battle of the Boxes has grown from its humble roots in 2013 to one of the biggest team events on the UK CrossFit calendar.  The first Battle of the Boxes saw a mere 4 teams compete from the East Anglia region, but by 2014 it had expanded to include 12 teams hosted in a 500 seat arena. 2015 is shaping up to be bigger than ever, drawing attention from boxes all over Europe as well as bringing back some of the UK’s most formidable teams.  This coming year’s Battle of the Boxes will see 32 teams invited to bring their battle cries to the arena at Charter Hall, Essex.

In 2014, teams took on beastly WODs including a team Clean Complex where lifts had to be in complete unison, a massive chipper sweetened with EMOM double-unders and a relay-style final.  The top teams, especially 2014 champions CrossFit Bury St Edmunds, demonstrated more than sheer athletic ability.  A solid team style with good communication, a common work ethic and clever strategy are essential to excel in a team competition like Battle of the Boxes. 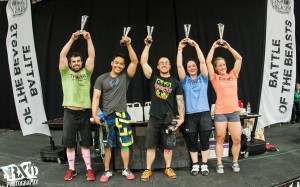 Chris has an extensive background in the fitness industry, but truly found his passion in CrossFit.  Not only has his own fitness taken off, but he finds coaching at CrossFit ultra rewarding.  The kinds of driven people CrossFit attracts are exciting to coach and Chris is inspired seeing the athletes he coaches achieve big things.  Chris is coordinating team training and selection for several events that are big on the CrossFit Colchester calendar for 2015, but none carries such personal importance as Battle of the Boxes. We all take pride in how far it has grown, and now bring on the Battle of 2015!

Battle of the Boxes essential details:

Finals Details – The top 32 teams will qualify for the finals which will be held here at the Charter Hall arena, Colchester, Essex.

For more information and to register, please visit http://www.colchestereventsltd.com/