After the success of last year’s ‘Battle of the Boxes’ the demand and anticipation for this year’s event was through the roof! We knew we would have to make it bigger and better than before so we moved this year’s venue to Charter Hall and got ‘Wolverson Fitness’ on board to provide their specialist range of elite equipment.

We were now able to include 12 teams and have 500+ spectators cheering them on, in addition to last year we also had a variety of retail stands coming to sell their CrossFit clothing, products, foods & services.

In the months leading up to ‘Battle of the Boxes 2014’ the first four WOD’s were released in advanced meaning teams could practise together and work out their tactics to deliver their best performances come comp day.

On the morning of 4th May 2014 the pristine flooring and brand new equipment all lay waiting for our athletes in WOD 1 (Clash of the Benchmarks). There were retailers setting up their stalls including:  Wolverson Fitness, ChasingFran, Rocktape, Naked Ape, Benchmark girls, GLC2000, The Movement Solution, Paleo Luke, Bulk Powders, The Primal Kitchen and Wholesomeafare. We even had Jodie Finnigan and Katrina Beans with their massage tables ready to fix up the athletes after each gruelling WOD they were about to encounter.

At 9.30am it was time for the first heat, the first four teams took their positions for the opening WOD which consisted of pairs “Fran” into pairs “Grace” and finishing with a 1000m row for time. Athletes and spectators alike were familiar with these classic CrossFit Benchmarks and it was the perfect way to kick off the competition. 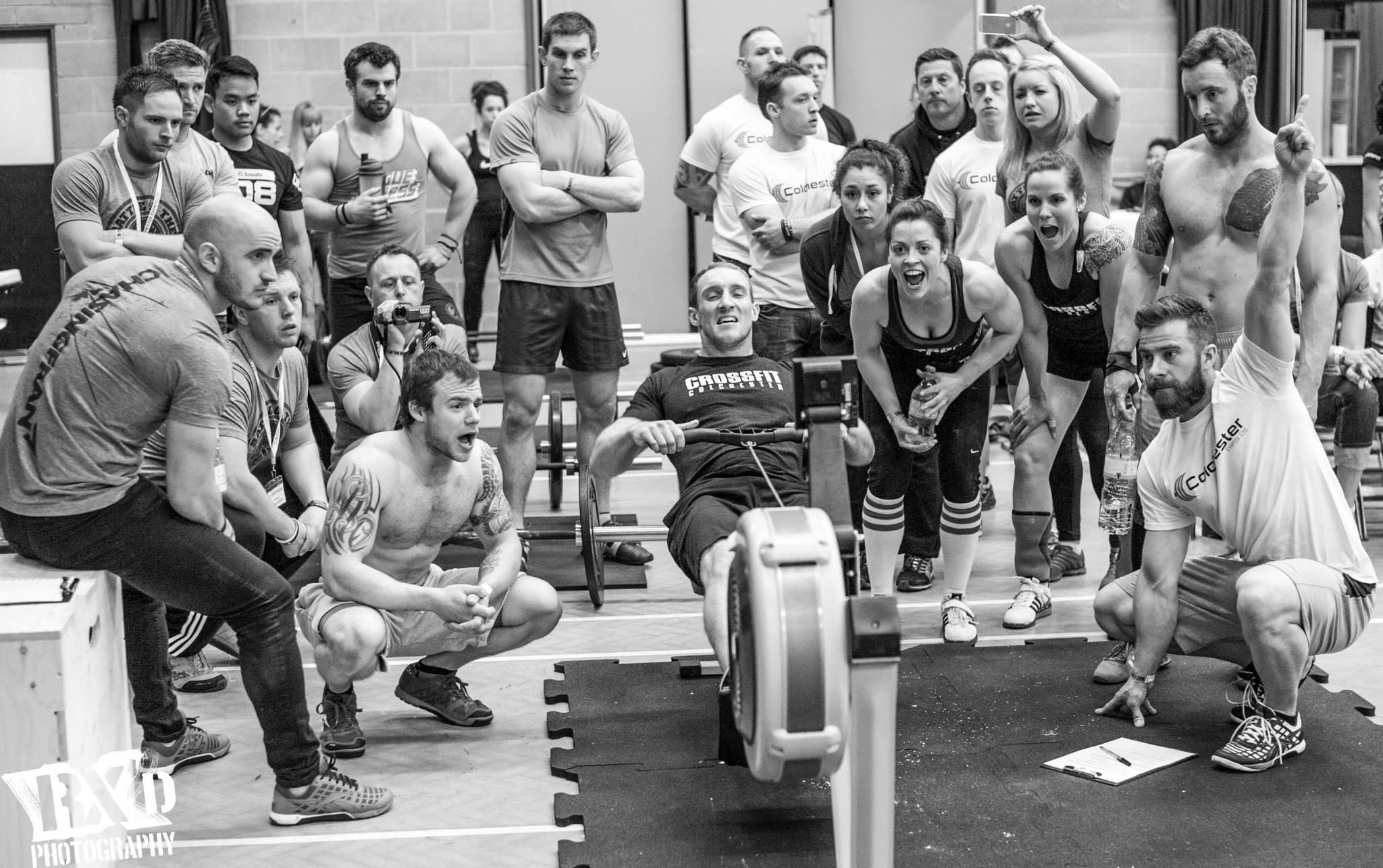 ‘Team Squat Clean’ was up next, all five team members had to perform a full Squat clean into a Hang Squat Clean all in unison, this meant they really had to work as a team and communicate well to decide what weight to use, when to increase their weight and how many attempts to take. Of all the competitions I have been to this is the only one where the music was turned off during the WOD and this made for an intense atmosphere, you could hear every grunt and groan as the athletes pushed themselves to the limit determined not to be the one to let their team down.

CrossFit Norwich nailed WOD 2 with an impressive team score of 435kg which moved them into joint first place alongside CrossFit Colchester, only one point behind was CrossFit 13, already you could see this would be a close competition with so many talented boxes involved. 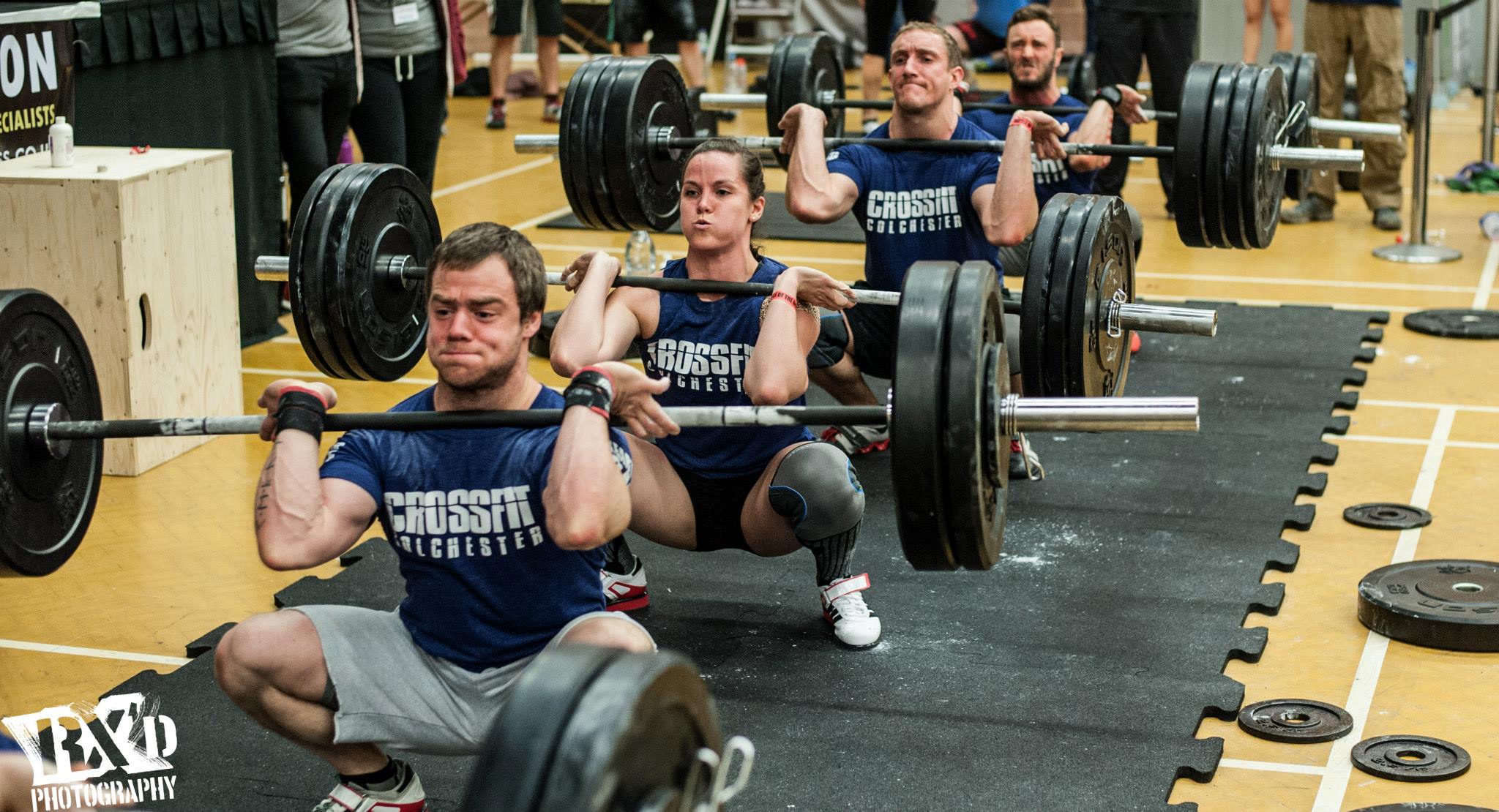 WOD 3 was the dreaded ‘Chipper’ a mammoth task of 150 Overhead squats, 150 Hang Power Cleans, 150 STOH, 150 Russian Kettlebell swings and 75 Toes to Bar! All this had to be chipped through on 2 platforms, whilst on the minute every minute one team member had to complete 30 double unders. 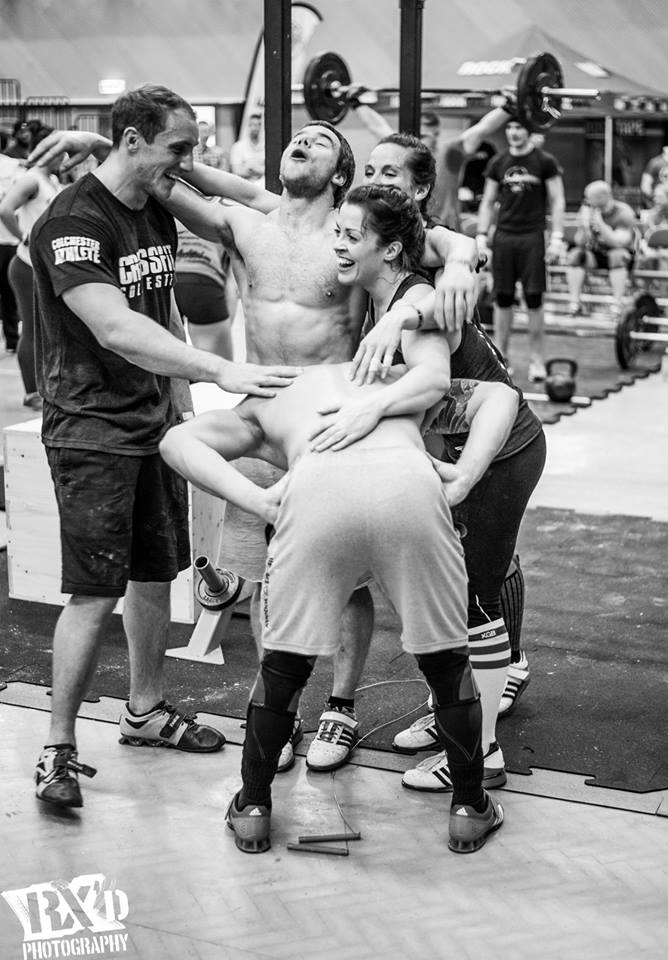 The athletes got a well deserved rest during lunch where there was succulent pulled pork or marinated chicken available with roasted vegetables and sweet potato. While everyone discussed the amazing efforts from the last three WOD’s the score board was updated: CrossFit Colchester had fought their way back to first place, followed by CrossFit Norwich and CrossFit Bury in joint second. Only one more WOD remained before the teams would be cut to the top four for the semi finals.

The shortest WOD of the day WOD 4: ‘Snatch vs. Bar Jumping Burpees’ whilst three team members carry out their one rep max snatch the other two team members completed as many bar jumping burpees as possible in the three minute time cap, the three snatches are added together and multiplied by the total amount of burpees performed by the other two athletes. Spectators got behind their teams knowing that this could be their last WOD if they didn’t do enough to make the semi finals. CrossFit Colchester put on an outstanding performance once again finishing first in three out of the four WOD’s so far. 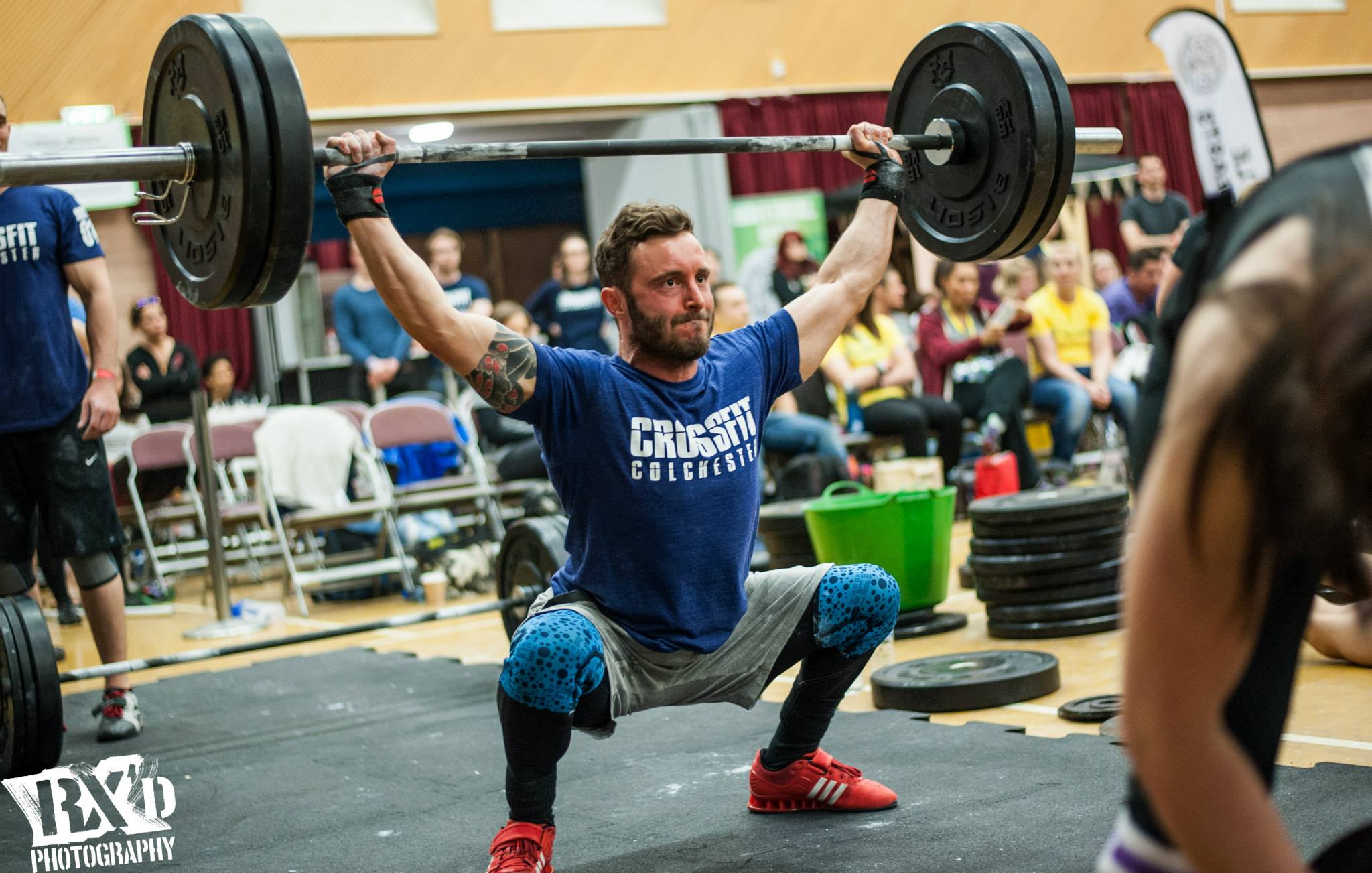 Athletes and spectators listened intently as the semi finalist were read out, CrossFit Colchester, CrossFit Bury, CrossFit Norwich and CrossFit CM2 had made the cut and now only two more workouts remained before this title would be decided. The scores were reset to give every team in the semi finals an equal chance of making it to the final and WOD 5 was revealed.

The semi final was one heat with all four teams battling it out head to head, the teams had to make their way through “pairs Deadlifts” vs Pistols starting with 30 of each and reducing the reps by 3 each round. It was so close the whole way as one team would take the lead on the dead lifts another would overtake on the pistols, the 7 minutes flew by and before we knew it we were announcing the finalist….

CrossFit Bury St Edmunds came first in this WOD making it through to the finals and with CrossFit Colchester only 4 reps behind they were also through and ready to defend their title.

Bury took the early lead with their rapid sled carries but Colchester closed the gap as they worked through the other movements, both teams delivered brilliant performances and kept the spectators on the edge of their seats. With an incredibly strong final set of sled carries Bury St Edmunds finished 28 seconds ahead of Colchester, claiming the win and the 2014 BATTLE OF THE BOXES TITLE, as soon as they finished captain Richard Peak and his team mates from Bury rushed over to the Colchester team and cheered them on right to the end in true CrossFit style! 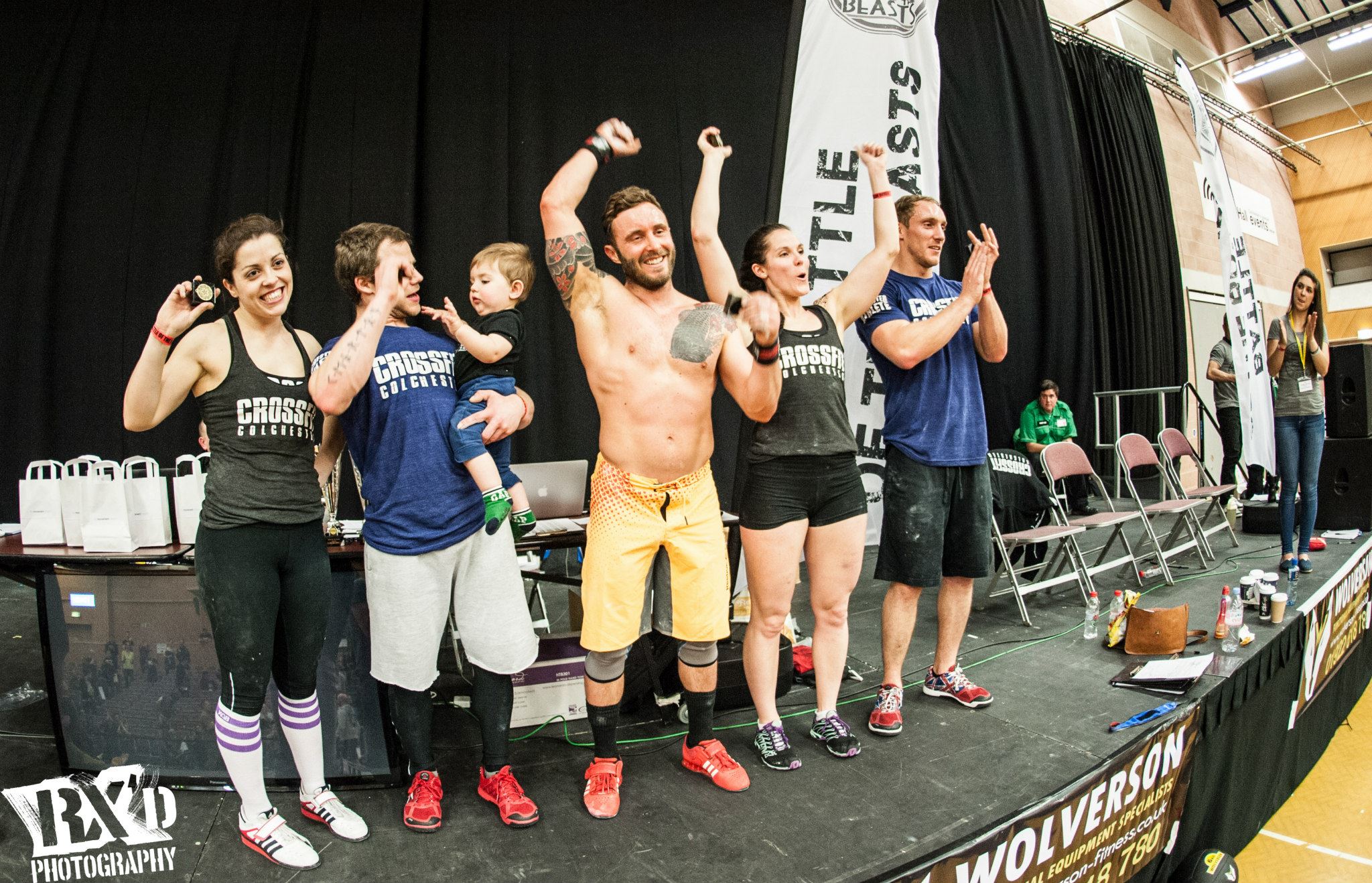 Congratulations once again to this year’s champions ‘CrossFit Bury St Edmunds’ who were outstanding all day.

This competition has set the standard for all future events held by Colchester Events Ltd and with the new Individual event launching in June (finals here in October), this will be one event not to be missed!!!

Register your details now at: http://www.colchestereventsltd.com