On 28th September 2013 CrossFit 1664 held their first ‘Box Rocks’ competition which saw 20 teams (8 people per team, minimum 2 females) going head to head, CrossFit Colchester had two teams taking part and little did we know this would be one to remember…..

It was an early start for most athletes including our Colchester squads who had to travel to Aldershot where the competition was being held. The day started with 4 qualifying WOD’s that were done in a round robin format- therefore no one knew how they compared to other teams. It was a case of give it all you have and hope that was enough to make the first cut!

The WOD’s were extremely varied covering every element within fitness, one was an AMRAP (as many reps as possible) with a 10 min time cap, the score was the total reps completed as a team of the following exercises: Over the wall Burpees, GHD Sit Ups, Weighed step ups, Axel GTOH and the dreaded Double Wall Balls! WOD 2 was a Clean ladder starting from 30kg increasing by 10kg each lift up to 140kg where your score was the total weight lifted by all team members added together (Congratulations to Jan Westrik for getting a massive 130kg PB!);  Another workout was a straight relay 2 laps per person doing Zig Zag sprints around kettle bells and then a beastly Prowler back to tag your team mate, your score was your whole teams time; And finally a stretcher carry, two team members had to be on the 2 stretchers at all times while the rest of your team carried them around the 1k course, this was a real team test as the last stretcher back was your time.

After four tiring workouts, we were only half way through the day and we had some good scores but no idea if they were good enough to make the cut of 8 teams into the quarter finals. There was a break for lunch for around an hour while the scores were collated, in that morning we had some tears of frustration, some PB’s and an injury to one of our athletes, anticipation and emotions ran high…….

Just after 2pm we found out that one of our teams had made the cut of 8 teams into the quarter finals in 3rd with our other team finishing a respectable 11th. It was a fantastic performance throughout the day for the second team as most athletes were competing for the first time and making it this far was already a personal accomplishment! 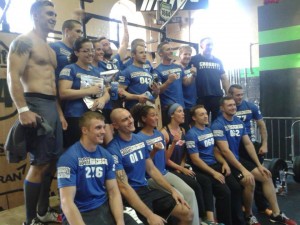 So we had one team left representing CrossFit Colchester and boy did they represent!! From here things only got harder, faster and more challenging. The next WOD would cut the teams down to four; it was held inside so all spectators could gather round and see the action up close. Now things got technical, showing who had the skills to make it to the end, comprising of double under’s, rope climbs, snatches, muscle up’s and much more all in a 30min time cap. But this was no challenge for our talented competitors who smashed this WOD in just 18 minutes, and over 3mins ahead of the second fastest team!!!

This gave them the confidence they needed going into the semi-finals, there were 4 stations; ring dips, overhead squats, snatches and box jumps. Each station had two team members where they got two minutes each to complete either as many reps as possible on the boxes and rings or their 3rep max on overhead squat and 1RM on Snatches. Astoundingly they also managed to destroy this WOD and sailed through to the final again in 1st!!!

The pressure was on now; this was it- their last chance. As the final work out was read out no one could believe the massive volume of work that was about to be expected from them.  This was definitely a WOD worthy for a final, 120 pull up’s, 120 toe’s to bar, 120 pistol squats, 120 dead lifts, 120 thrusters, 120 kettle bell swings. Once each set of one exercise was completed they also had to perform overhead axel bar walking lunges and hand stand walks to the next exercise and over the finish line! As the athletes started the colossal task ahead of them the supporters screamed and shouted encouragement and with a huge army of supports there was only 1 team you could hear CFC CFC CFC, so desperate to  help their team and see them all succeed.  As much as they wanted to give up at times each and every member never would, delivering fast reps throughout and rotating quickly for maximum output they would never let their team mates down. It was neck and neck for so long, just as one team took the advantage the other team would swipe it back within minutes, it went on like this for what felt like forever as the suspense grew and grew but eventually it did come to an almighty end. The victory came down to this- the first team to hand stand walk over the finish line about 20m away would win and we did it!! We crossed that line only a few meters ahead of the home team of 1664, we were all overwhelmed and could not believe what had just happened. Every one ran to our triumphant athletes who were bursting with pride and could not contain themselves.

CrossFit Colchester won this year’s box rocks down to their dedication in training and a mammoth amount of team spirit on the day, roll on next year where we will endeavor to defend out title. Until then we will continue to train hard and help each other every day to become the best that we can be.