‘I am very proud of her as a mother. I think she is very strong both physically and mentally, and puts her all into everything she does. Plus she is so much better than me at weightlifting!’

Audrey and her daughter Ciosa (16) have been doing Crossfit now for 2 years. They have just competed in their first paired scaled competition together, and perfromed well with Ciosa hitting a 60kg clean PR (this is just over body weight).

Can you tell us how you got started at French Vanoli and with CrossFit?

Audrey: I started in French Vanoli in December 2013 after hearing about the Strength & Core classes through my friend Tracey Valentine. I was attending another gym at the time but I was getting bored and really wanted something different and more challenging. For over a year I attended S&C classes and I could feel get myself getting fitter and stronger. The Coach suggested maybe trying CrossFit. In January 2015, myself and 2 of my fellow S&C goers, Laura and Valerie decided to give it a try and we haven’t looked back since.

Ciosa: The Coach had suggested to Mom that I should come try it. He knew my background was in gymnastics and thought it would be something I would be really interested in.We talked about it for a while and after some persuasion I finally started in June 2014. It was nothing like what I had pictured in my head. But it didn’t take long before I began to love it more and more.

What was your background fitness before joining?

Ciosa: Well I’ve always had a love for sports. I tried ballet when I was five, but soon realised I was not the graceful ballerina type and got into gymnastics instead. For 8 years I practiced gymnastics and competed at an international level. I decided to leave this sport because I just found I wasn’t enjoying it anymore.

Although I had moved on to competitive cheerleading I always felt like there was still something missing…I was used to spending a lot more time training when I did gymnastics and this was another reason I decided to give CrossFit a try.

What is it about CrossFit that you love?

Audrey: At the start I found it hard to get used to the weights and the different techniques; only for the help and patience of the Coach’s Padraic and Donna – there were times I felt like crying as I thought I would never get the hang of it. I considered leaving CrossFit and going back to S&C on several occasions but I stuck it out – and I’m so glad I did. It helped to have Laura and Valerie alongside me; we tended to encourage each other along the way.

All the other members were great and really offered their help and support in any way they could. That’s actually what I really like about CrossFit at French Vanoli. It’s the sense of “team spirit”; even though it’s competitive, everyone tends to support one another and cheer each other on.

I can say I really like CrossFit now and I feel I am getting stronger and slightly better with the weightlifting. (I hope the Coach’s agree)

My overall goal for CrossFit is to become stronger and overcome some of my biggest fears. Sure I would like to lift heavier weights; but for me, my main goal is to be able to do a strict pull up. If I could pull up my own body weight up on the bar I would be extremely happy with myself. Also my biggest fear and it is a real fear, is “HANDSTANDS” I think my body might be able, but my mind is not willing. However, I am working on this and I have also told Ciosa I will give her €50 if she can have me doing handstands by the end of the month!! I’m not mentioning which MONTH though!!

Ciosa: I love that sense of achievement you get after completing a class. When you’re absolutely drained and want to stop so much, but push through. You feel as if it was all worth it and feel pleased with yourself. 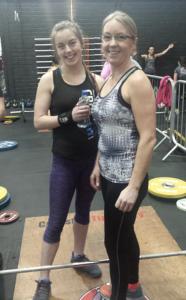 Are you both competitive?

Ciosa: Well I think we both bring the competitive side out in each other. Mom thinks she’s far from competitive but I’d beg to differ.

Audrey: I don’t think I am competitive but I think Ciosa disagrees with me. She thinks I am very competitive and that I always want to achieve higher scores than her; I don’t see it as serious competition between us, it’s more a bit of fun.

Is their rivalry at home – comparing scores etc?

Ciosa: Well the first thing mom says when I see her after a class is “what time/score did you get?”. We are always watching each other’s scores on WODify and commentating on each other’s results. But it is only ever a bit of fun.

So you have a competition coming up soon – are you looking forward to competing together?

Ciosa: Yes we are both looking forward to it and hoping we don’t kill each other before hand. I really enjoy competitions and am excited to compete in another one. I feel we will work well together. We are both aware of what each other is capable of and can encourage each other all the way.

Audrey: I am looking forward to the competition, but I am also a tiny bit apprehensive, as it’s my first competition. I am very proud to be doing the competition with Ciosa and think it will be a special memory for us both.

Ciosa, has your mum ever embarrassed you in class?

Well she usually keeps the embarrassment out of the gym. But she tends to get quite mad when I suggest things in class. When I tried to help her with her handstands in a class, it just ended up with Mom shouting at me to leave her alone, and we were both giving each other daggers for the rest of the evening. But I’m sure she will say her fear of handstands gets the better of her (which I know she will get soon, maybe with a few bumps and bruises along the way). Nothing will stop her. She’s got great determination.

Do you find it difficult in class – being one of the youngest members?

Ciosa: Sometimes I do find it difficult and sometimes I don’t. Most of the time I tend to forget about my age. I don’t want to use it as an excuse to hold me back. Some people think that I’m at an advantage being so young, but in my eyes it makes no difference. I guess the gymnastics and cheerleading help me in certain areas but everyone has their strengths.

Audrey, your whole family is very involved, you have another younger daughter who also does CrossFit?

Yes my youngest daughter Abbi, who is 7, also goes to CrossFit kids. Abbi is very social and she really enjoys doing the games and exercises with the other kids. I really do strongly believe that CrossFit is great for all age groups. From my own perspective having daughters, I think CrossFit is a great role model sport.

I really do believe that these are all crucial steps for building positive self-esteem.

So Abbi, what do you like the most about CrossFit?

‘You get fit, it’s fun, its good exercise, teachers are fun, you make lots of friends like Simona… Oh and you get to have parties where an ice-cream van comes around and you get to pick your own ice cream.’

So thank you all at French Vanoli for giving myself and my daughters the opportunity to exercise in an environment where we feel supported and encouraged. We are very proud to be part of the CrossFit Galway community at French Vanoli.

All we need now is to get my husband Vince back into training!